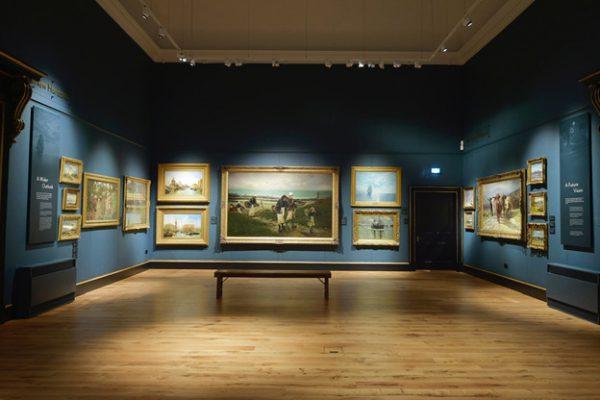 This exhibition showcases some of The Stirling Smith Art Gallery and Museum’s remarkable art collection. Both the building and the collection is of considerable historic and artistic significance and owe their existence to the artist Thomas Stuart Smith (1814-1869).

Smith was an accomplished artist and an avid collector. Known as the ‘man who could paint anything’, and he could turn his hand from landscape to portraiture, from still life to seascapes.

The artworks on display are part of Smith’s generous legacy which enables the Gallery to continue the tradition which Smith began of collecting some of the finest contemporary art. You can see works by prominent artists including Anne Redpath (1895-1865), William Gillies (1898–1973) and William MacTaggart (1903–1981), all renowned for their expressive handling of colour, form and brushstroke.

Following in Smith’s footsteps, other benefactors have gifted work to the Gallery. One of the most impressive paintings in the collection, and certainly the largest on display, is Les moulières à Villerville by Maurice Poirson (1846-1882) which was bequeathed by local seed merchant John Gray. You can also see work by George Henry (1858-1943) who studied at Glasgow School of Art and rose to prominence as one of the guiding lights in the early days of the Glasgow Boys. His painting Spring Has Come was donated by the Scottish Artists Benevolent Association and his work has had a lasting influence on subsequent generations of artists.

Register for Exhibition: The Man Who Could Paint Anything – The Legacy of Thomas Stuart Smith

Your ticket for the: The Man Who Could Paint Anything – The Legacy of Thomas Stuart Smith