Singing Under the Same Sky by Derek Robertson 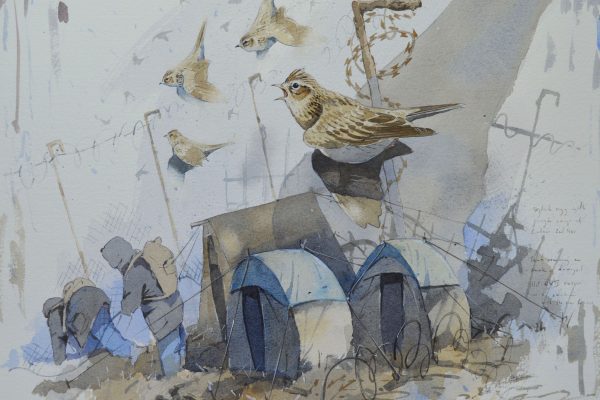 The Smith is pleased to welcome an artistic field study of adversity by Derek Roberton, Migrations.

For decades Derek Robertson has been studying the migration of birds. He has followed them from Africa to the Arctic, through their migration routes across the Mediterranean, and to their home ranges in Europe.

Observing the migration pattern of birds plays an important role in highlighting significant environmental shifts such as climate change and habitat loss. Recent scientific studies have revealed links between climate change, civil war, and the refugee crisis. Robertson brings this to our attention through his artwork by overlaying depictions of refugees and migrants with migrating birds.

Refugees and migrating birds are now sharing the same flight paths to survival.

The sketches are based on observations from life: Robertson has visited refugee camps in the Mediterranean, Scotland, Sicily, Cyprus, Jordan, and Calais. Singing Under the Same Sky focuses on two of the biggest issues facing the world right now: climate change and the refugee crisis. Furthermore, it demonstrates how closely linked these two issues are.

Robertson graduated from Duncan of Jordanstone Art College in 1989 and has been working as a professional artist ever since. His work has been exhibited in galleries across the world and are held in numerous private collections including that of HRH the Duke of Edinburgh. In addition to his work as an artist, he has written books and articles and produced television programmes which also explore art and nature.

Register for Exhibition: Singing Under the Same Sky by Derek Robertson

Your ticket for the: Singing Under the Same Sky by Derek Robertson

Singing Under the Same Sky by Derek Robertson