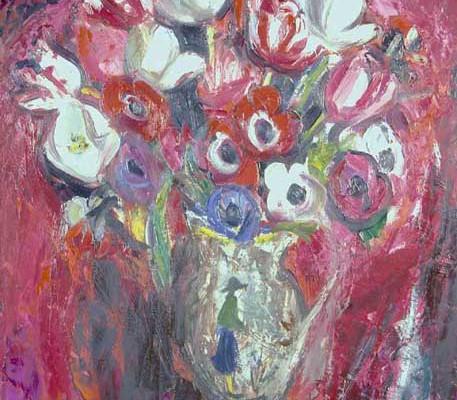 The latest exhibition from the Stirling Smith Art Gallery and Museum collections, focuses on the change of contemporary style over a period of 100 years.

The twentieth century art on show is very much from the Stirling point of view. The work of Helen Flockhart, one of the most accomplished painters of her generation, is well known, as is that of her partner Peter Thomson. The award-winning works for the Smith’s 1996 Brave Art Exhibition, now in the Smith’s collection, are featured in the exhibition, together with similar themed work by Joan Sommerville and Graeme Myles.

Six battles which changed the course of Scottish History took place in and around Stirling and it is not surprising that Bannockburn features, in the form of Pilkington Jackson’s maquette of the King of Scots in Battle, completed in 1968.

Many artists who lived and worked in the Stirling area are featured – Nellie Harvey (1865-1949) niece of Sir George Harvey PRSA, John Munnoch, M.Fleming Struthers, Steven Campbell and Sir D Y Cameron, it is thanks to the generosity of Cameron that the Smith owns the stunning portrait of the artist Cecile Walton, painted in 1913.
Although the exhibition has many beautiful Stirling scenes there are also significant works by Scots from Elsewhere – Crozier, Gilles, Lesley Banks and a host of others.

Register for Exhibition: 20th Century Art In the Smith Collections

Your ticket for the: 20th Century Art In the Smith Collections