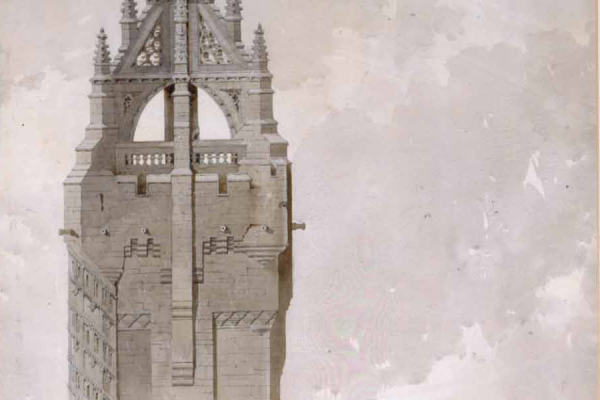 The architecture of Stirling has been celebrated for hundreds of years.  For most visitors to the city, the first sight to greet them will be the Renaissance buidlings of the Castle and the Victorian monument to medieval warrior William Wallace, atop their respective hills.

Images of Stirling’s buildings were engraved for publication in the late 17th century, and in the early 20th century, the National Art Survey of Scotland and the Royal Commission for Ancient and Historical Monuments of Scotland sought to catalogue all Scotland’s built heritage through a series of paintings, sketches and photographs.

These resources, along with many architects’ designs and models, are now part of Historic Environment Scotland‘s collections, and this summer, they have loaned an exhibition’s worth of them for display here at the Stirling Smith Art Gallery and Museum.  Come along and see parts of Stirling that you didn’t know were there, that are no longer there, and some which could have been built but never were!

Your ticket for the: Stirling Builds