James Wedlake joined the Stirling Smith staff as an Intern, on the Museums Galleries Scotland Adopt an Intern scheme in September. A graduate in the History of Art from the University of Cambridge, James (23), has encountered and tackled many of the issues involved in curatorship, and is now ready to take on the challenge of curating a retrospective exhibition of the works of Hugh Green (1891-1972), the Bridge of Allan based artist, friend of Charles Rennie Mackintosh and house painter.

The exhibition is scheduled for August – September 2014, and James would like to hear from anyone who would be willing to lend any works by Hugh Green or share any memories of his life and times.

Hugh Green’s work as an interior decorator was also significant. He was the local agent for Craig & Rose (est.1829), Britain’s oldest paint manufacturers and painters of the Forth Railway Bridge. James would be pleased to hear from anyone who may know of a surviving interior scheme by Hugh Green, anywhere in the district, which could be recorded for the catalogue. 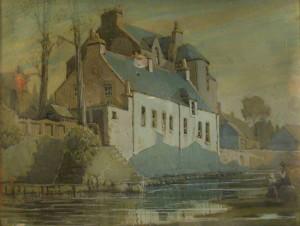 Your ticket for the: Hugh Green’s Stirlingshire – a Retrospective