Looking more closely, it became clear that there was more to the actual picture, than I had first thought 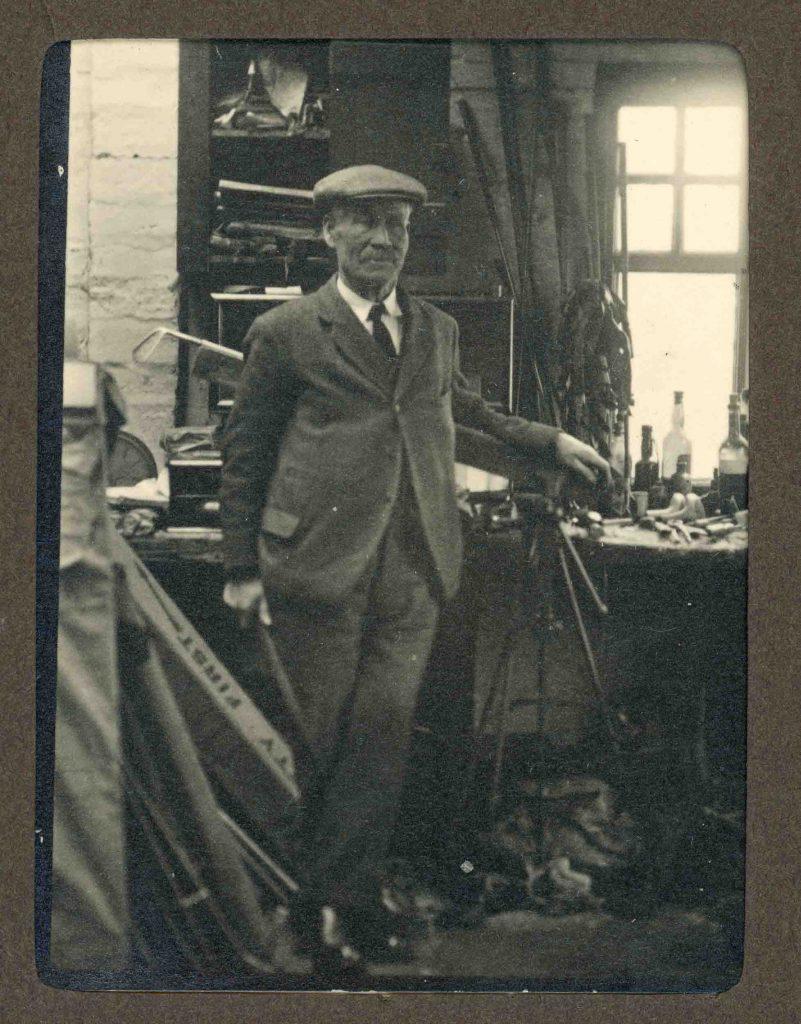 Behind John Duncan are various Golf Clubs   In the Smiths Permanent Collection is a Cleek Golf Club made by the very man himself   The cleek has a wooden shaft, steel head, dimpled face and a Fine Leather Grip   It’s condition unfortunately isn’t that great   The cleeks records provided me with further details on its maker:-

“John Duncan (1861-1939) was the professional at Kings Park Golf Club from July 1901 to his retirement in 1935. Born in Fife, he served his apprenticeship as a club maker with Forrester at Earlsferry, Elie. His first job was as professional at Peebles, then at Kelvinside Golf Club. He was paid £1 per week with a free workshop, coal and gas. At Kings Park, he made clubs, gave lessons and looked after the greens. Duncan soon became associated with the St Ninians area and by 1903 was living in Main Street. He had connections with St Georges Church, St Ninians, for nearly 40 years and was an elder there. He had a big input into the redevelopment of the new 18 hole course which opened in 1912 and his pay rose to £1.5s a week in recognition. He retired in 1935 and died in 1939.”

I am now about to jump into the water!   Personally, Golf is a game and leisure pursuit, the popularity of which I’ve never truly understood   Hitting a wee white ball around a field using a stick, with the aim of getting the ball  into a very small flagged hole, has always seemed rather strange to me

When a teenager I used to walk my dog around the edges of the King’s Park, and on the odd occasion a golf ball would land near him, being a dog it was his natural instinct to run and pick it up   Once retrieved from him I would throw it back onto the green making sure it was nearer to the hole/flag than it had previously landed   You could say I was offering the Golfer some friendly assistance

The Holy Grail of playing Golf is apparently achieving a “Hole in One”   While I appreciate that great skill must be involved in doing this, being a “True Scotsman” if I was playing I’d keep it quiet, as the penalty of reaching this goal is buying everyone in the bar a drink   This sounds to me more a penalty than a congratulation   Tap water is a drink so maybe that way the achievement could be rightly celebrated while ensuring the lucky golfer didn’t break the Bank!

Your ticket for the: John Duncan, Stirling’s Golfing Professional 1901-1935