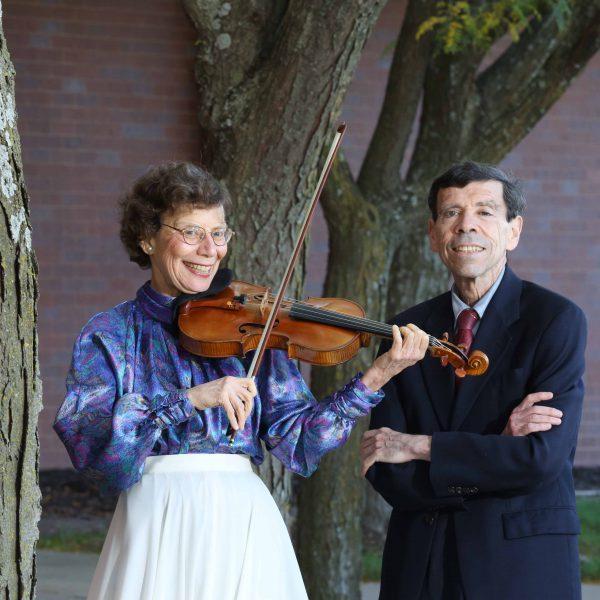 A Night of Musical Magic performed by The Goldenberg Duo

Tickets can be purchased on the night or in advance £5

With a creative sparkle, Susan Goldenberg has toured the world with her music.  She has performed at the Tanglewood Music Festival, Grand Teton Festival, Colorado Music Festival, Blossom Music Festival, Yale at Norfolk, and Flagstaff Festival of the Arts.  She co-founded the Charlotte Symphony String Quartet and the Quartet of San Jose, Costa Rica. Miss Goldenberg and her brother, William, have performed as the Goldenberg Duo for 39 yrs. at various universities and series including the University of Missouri in Kansas City and Kansas City’s Ruel Joyce Series. They captivated audiences at the Amalfi Coast Music Festival in Italy, The American Cathedral in Paris, and St. Peter’s Church in St. Albans, England. They travelled to China for concerts and master classes in Beijing and Shanghai.  They have toured Scandinavia, British Columbia, Australia/New Zealand, Hawaii,

Alaska, and the Baltimore/Washington,DC area at the Smithsonian American Art Museum.   Recently, they performed inJapan, Ontario/Quebec, The Lettvin Chamber Music Series in Bradford, New Hampshire, Ireland, Scotland, The Hague,France, Eastern Europe and in 2016 had a successful tour of Iberia, Italy. In 2017 the Duo performed/taught in British Columbia with concerts in Vancouver, Victoria and Kelowna.  In 2018, the Goldenberg Duo performed 8 concerts in the Atlantic Provinces.

Miss Goldenberg has been in the first violin section of the National Symphony of Costa Rica, the Charlotte Symphony, the Kansas City Chamber Orchestra, Kinnor Philharmonic and the Kansas City Symphony for over 39 years, also frequently performing chamber music for the symphony’s Community Connections Initiative.  She has taught in the Charlotte school system, University of Costa Rica, and Blue Lake Fine Arts Camp in Michigan.  Susan volunteers at Children’s Center For Visually Impaired in Kansas City, Missouri during her summers. This year Susan received the 2018 Honoree of the Year Award from the KC Musical Club.

Frequently invited to guest teach at institutions such as Indiana University-Bloomington, Liszt Academy-Budapest, Shanghai Conservatory, and University of Melbourne, he is currently Distinguished Professor and Chair of Piano at Northern Illinois University.  Goldenberg earned the doctorate from Indiana University where he was appointed Personal Assistant to Menahem Pressler, and the master’s degree from Juilliard on Fellowship with Martin Canin and Rosina Lhevinne; he studied chamber music with Felix Galimir and Josef Gingold.

Your ticket for the: A Night of Musical Magic performed by The Goldenberg Duo

A Night of Musical Magic performed by The Goldenberg Duo