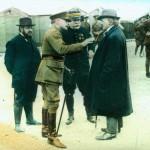 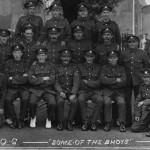 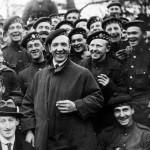 Post card print of a posed group of soldiers with Sir Harry Lauder during World War 1. One soldier in the foreground is holding a spaniel dog.

Photograph of the Highland Light Infantry Camp in June 1915. 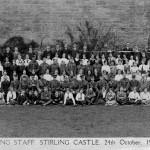 Group photograph taken at Stirling Castle, showing the members of the recruiting staff, soldiers and civilians, (men, women and children) make up the team, 24th October, 1916. 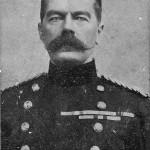 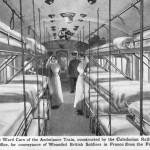 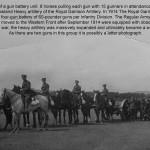 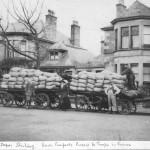 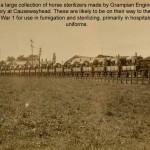 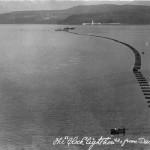 Postcard view of a barrier running between Dunoon and the Clock Lighthouse with two central trawlers to move the nets aside when required. This is probably anti submarine netting protecting the River Clyde. 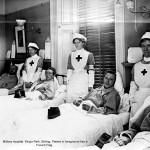 LINES written to Private A. DRUMMOND as a token of esteem, from a chum in the Black Watch, being the combined thanks for the splendid sacrifice when giving some of his own blood to save a brother comrade, while in an American Hospital in France.

JUST a line or twa, my trusty freend,
Let me give it rhyme tae you;
For a pal like Sandy ’tis hard tae find,
And the best o’ company, too.

You saved the life o’ a brother Scot,
And you’re worth a few weeks’ leave;
I hope that this will yet be got;
Your example we canna’ conceive.

On~behaif o’ the-lads I’m gaün tae speak,
Their thanks I express it in rhyme;
Tho’ for a day or twa we ken you were weak,
But we hail thee a brother o’ mine.

The Black Watch is proud, we ken, o’ their ain,
Tho’ there’s mony that’s lang passed awa’;
But we’re glad you are weel and free from pain,
For you belang tae the auld Forty-Twa.

When on leave tell the hame folks frae me
That they’re aye on our mind oot here;
And when we’re th’gither in company
We speak o’ them reverent and dear.

My last wish is that this war will be ower,
Very soon well be in Perth aince mair;
And I’ll drink your health in Huntingtower,
By the side o’ the auld Almond fair.

Poem written to Private A, Drummond by a chum in the Black Watch as a token of esteem.  Private Drummond was a blood donor and his blood was used to save the life of one of his “chums” in the Black Watch regiment. He was being treated at the American hospital in France and is dated march 1918. The poem was written by R,N,Marshall of the 6th Batt Black Watch who was from Perth. These poems were sold by ex servicemen to raise money. Many of these ex servicemen were invalided out and never recovered after the war either from the physical or emotional injuries.

Your ticket for the: Remembering WW1