Have you ever wandered around Stirling and noticed wolves decorating many parts of the city? The reason for this is that the wolf is a symbol of Stirling and has been since the early medieval period.

Long ago, in the 9th century, the small town of Stirling found itself on the border of multiple kingdoms, all of whom wanted to expand. It was first under the rule of the Picts until the princes, Osbrecht and Ella captured the town, making it part of the kingdom of Northumbria. No sooner had the warrior princes acquired Stirling then it was under threat of another invasion: this time the Vikings.

Legend has it that while the town of Stirling was asleep, a band of Vikings approached, ready to attack under the cover of darkness. While the Vikings were quiet enough to not wake the sleepy town, their approach did disturb a pack of wolves on the crag. The wolves began to howl, immediately waking the townspeople, the princes, and their soldiers. Everyone awoke to find the Vikings fleeing, scared away by the howling. The princes allegedly painted the wolf on their banner as a tribute to the creatures who saved Stirling from more bloodshed. Though Osbrecht and Ella would later die in battle, defending York from more Viking invaders, the wolf remained a symbol of Stirling to this day.

Much like the city centre, you can find wolves decorating objects throughout the Smith’s collection. Our most notable wolf is a painting that was in the Stirling Tolbooth in the early 18th century. It shows a wolf lying peacefully on a bed of wildflowers. The wolf also appeared on the town seal and Stirling jugs which were the official pint measurement for Scotland in the 17th century. Here are other Stirling Wolves in our collection. Where have you seen wolves in Stirling? 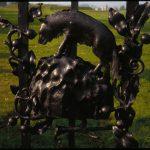 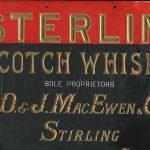 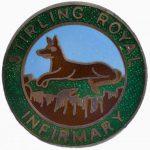 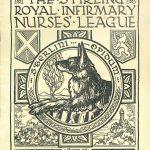 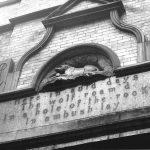 Your ticket for the: The Stirling Wolf