Andrew Hay is a well-known Scottish artist with paintings in several museum collections. This work of his is in the Smith collections and depicts the brutal murder of Wallace at Smithfield on St. Bartholomew’s Day 1305. Bartholomew was the Patron Saint of the Butchers, and Wallace was butchered as part of the St. Bartholomew’s day entertainment on the instructions of King Edward I. 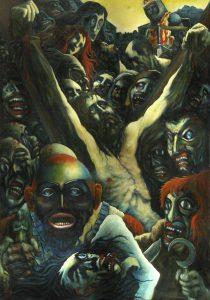 The artist has depicted Wallace’s death like that of St Andrew, the Patron Saint of Scotland, for, as the writer Robert Bontine Cunninghame Graham said:

‘Wallace made Scotland. He IS Scotland. He is the symbol of all that is best and purest and truest and most heroic in our national life. You cannot figure to yourself Scotland without Wallace. So long as grass grows green, or water runs, or whilst the mist curls through the corries of the hills, the name of Wallace will live’.

King Robert Bruce is shown at the top right of the painting, waiting to take on the challenge of Wallace and waiting to inherit the spirit of freedom which he instilled into the Scottish people. Without Wallace, the struggle of Bruce would not have been possible, and this is worth remembering today, on St Andrew’s day.

Your ticket for the: Wallace and St Andrew