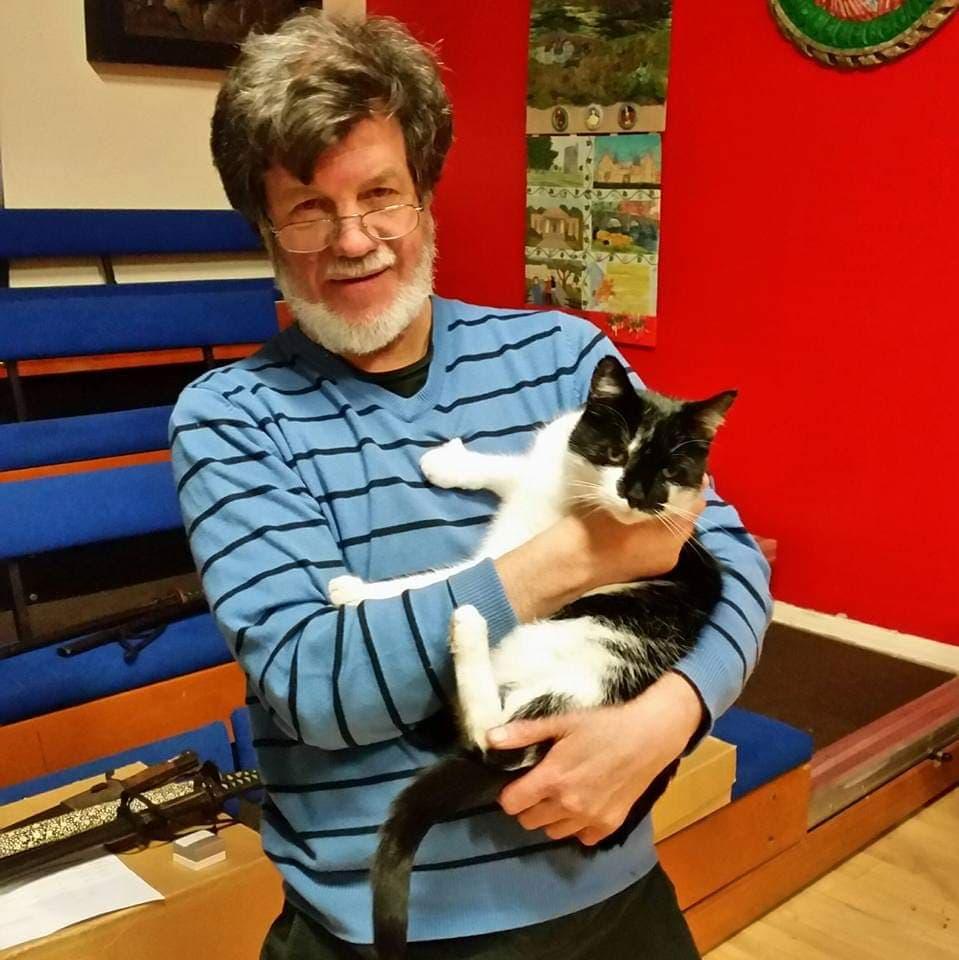 As of Monday the 13th of April, I will no longer be a Curator of the Smith Art Gallery and Museum after 40 years and 8 months exactly at 9.30 am. My start date was the 13th August 1979 and I was taken by the personnel office to meet the Curator, Mr James Thomson, in the Old High School at that time.  In the office were two volunteers, Janet Olsen and Diana Sykes, both from St Andrews University. That was the start of the good times, the bad times, the frustrating times, and the exciting times.  I never expected as a Curator that I would also have animal times. First was Hamish, Hector, Magnus and the gang of sheep and goats that occupied the garden in 1996 as part of the Denovan Adam exhibition.  Then in 2004 a furry little cat appeared through the front door and who subsequently we got to know as Oswald.  Oswald was not the museum cat for a long time. He lived in the house next door with the Clingan family but was attracted to The Smith because there was a ready supply of food provided by certain members of staff.

At the beginning as a young cat he was a bit boisterous and arrogant and thought he should be in charge but there had to be rules. 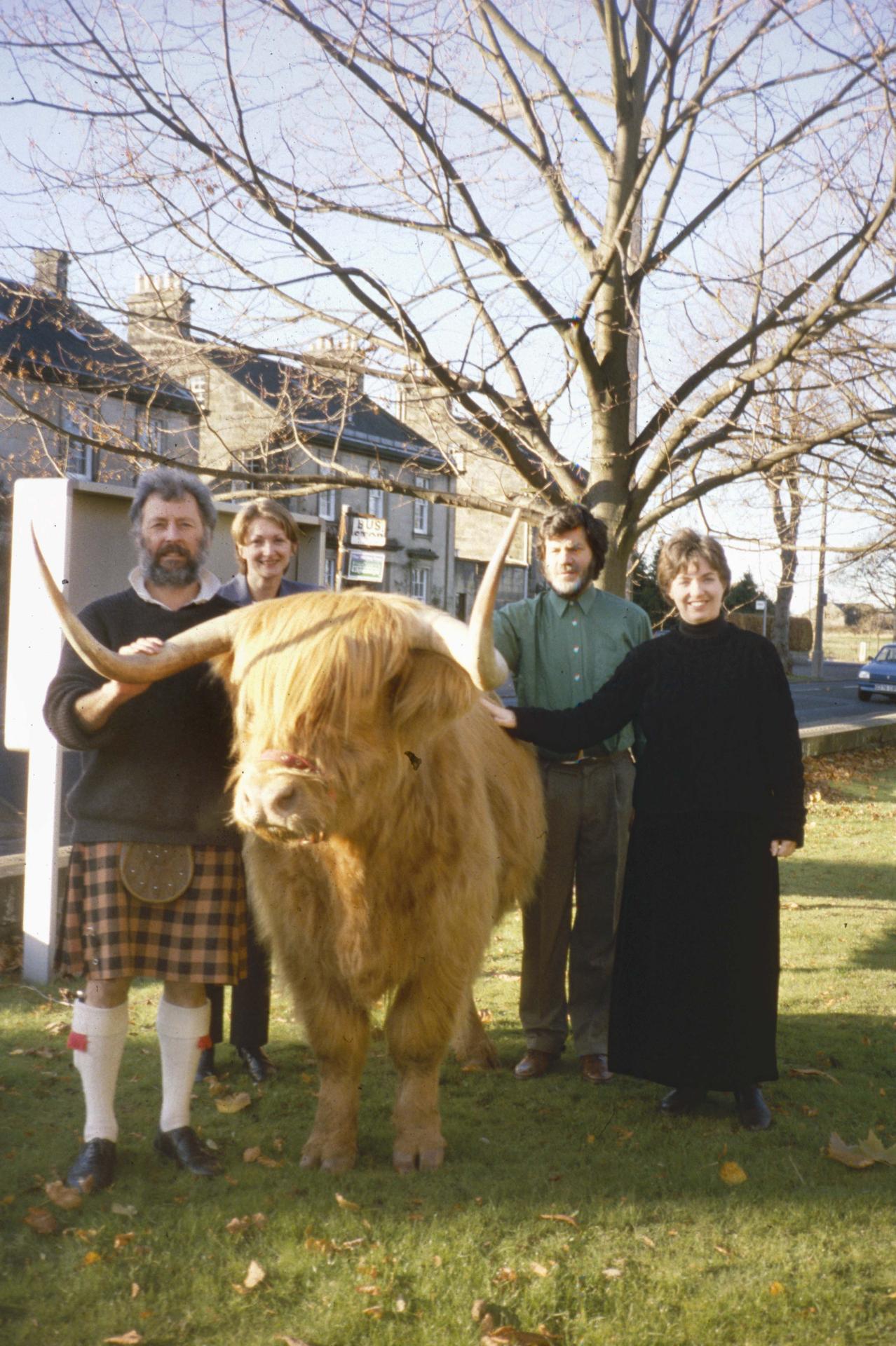 Hamish with me and Maria Devanney and owner Sean Barrington

At first he had a tendency to bite and scratch for no reason. We could not allow this behaviour when there were children about so I had to deal with it in the way his mother would have done: with the claw stretched out above his head and lots of hissing. He got the message very quickly and became a much better cat when he realised good behaviour got him more attention.  He took to sleeping in the Museum during opening times but always disappeared just before we closed for the day but came back if there was an evening meeting. Many of our clubs will remember him sleeping on the chairs during their meetings in the theatre. Suddenly however he was gone. The family moved to Bridge of Allan but Oswald wasn’t happy as the garden was not protected enough and there were lots of other cats about. After about a year Oswald returned to the museum but now as The Museum Cat.

He never lived inside as he preferred to be out during the night, even in the worst of winters.  He still remembered his old house so would always visit the new owners and their two daughters, who I know adored him.  He also slept in their summer house and we had a sleeping place in the boiler house for him, which of course was warm.

Oswald ruled the museum grounds. They were his domain and he sent many a cat, and occasional dog, fleeing. Dogs of any size were dealt with the same way. Pounce first, ask questions later.  I know he had a full-grown Alsatian on the ground squealing because the poor dog had decided to walk across Oswald’s grass.

He also had running fights with another visitor to the grounds. Willow was a beautiful dark grey cat that lived nearby, and although difficult to approach, was a really nice cat if he let you get close.  However, Oswald objected to this interloper and I had to intervene several times as they had fights across the streets outside.   In the process I became a sort of support, just like the wee folk at the Battle of Bannockburn.  Willow died fairly young, but I don’t know if Oswald missed him. Oswald has never really had a problem with any of the new cats.  Several have come by, but they are ignored or shown the door if they dare to come in the Museum entrance.  However, his association with other animals was often odd. The crows visiting the garden in the morning would get very close to him and they seemed to not mind each other. One morning I arrived at the gate to find Oswald and a wood pigeon sitting next to each other under the barrier waiting for me. Both had the same objective: Oswald to get his breakfast and the pigeon because I occasionally filled the bird feeder. 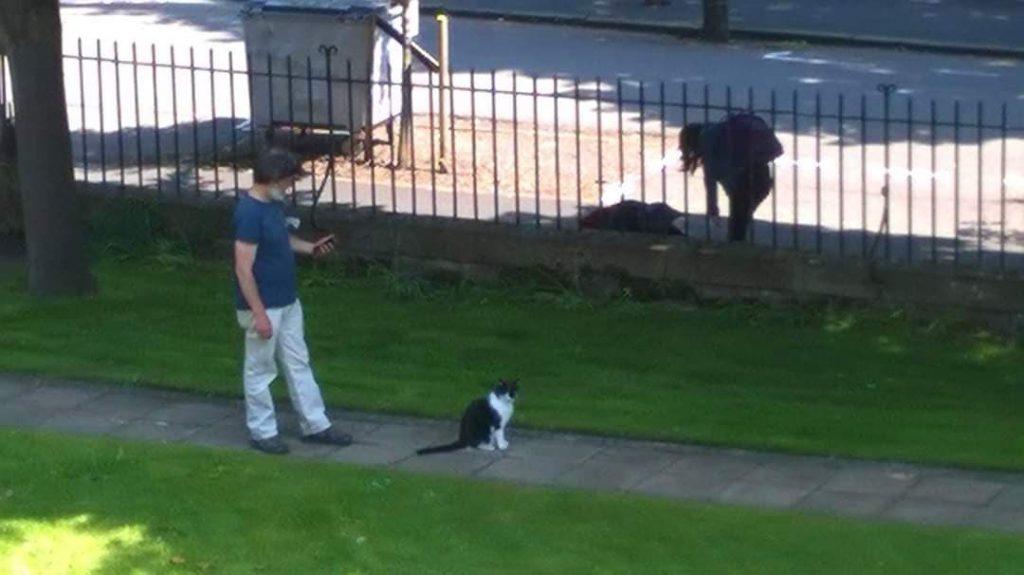 It was obvious that Oswald treated me as the head of the pride but never really got affectionate, except when he wanted food. Apart form Nikki, who fed him at the front desk in the evenings, he never sat on the men, only the women. Even if I picked him up he jumped down immediately.  He also knew I was not a softie when it came to food whereas he attacked the Director, Elspeth King, when he wanted treats.   He could also speak as he had several different whines depending on whether he wanted fed, let out the back door, or through into to the front hall.  As my office was adjacent to all these places it did on occasions become a bit onerous. As he got older, he became more obstinate about his food.  He wouldn’t eat the same food two days in a row. He preferred what you were eating and really all he wanted was a big steak dinner or possibly a whole salmon.  I even found him sitting on a banoffee pie at my birthday party eating the cream off the top.

A few years ago, he became very ill, probably a gut infection, and he lost a lot of weight.  They never really resolved what was wrong with him, but he bounced back very quickly only to get thyroid problems shortly afterwards.  He is now on tablets to maintain that and is fine with it although we had to be clever about hiding the tablet in the food as he would not take it otherwise.  Recently it has become obvious that he was changing. He did not want to go out at night and spent more time sleeping in my office under the radiator. He will be 16 years old at the beginning of May and my thoughts were already turning to how he would be looked after when I retired.  The virus just accelerated the decision to retire him to a lovely cosy home.  I could not take him as we have a shared garden with three cats and a dog next door. That would have been a nightmare for him.

I was already going to miss Oswald when I retired but now with the Covid-19 virus crisis that has been accelerated.   It’s unlikely I will ever see him again and maybe that is for the best. I don’t want to get him confused about returning to his home.

It has been a privilege to work at The Smith and to be there at a time when we were able to do such wonderful activities. Skylark for the 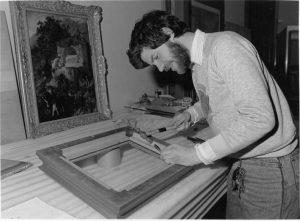 children, special needs projects for adults with learning disabilities where we closed the whole Museum for them (thank you Tricia Cooke for those). The travelling exhibition from the theatre at Stratford where we had the complete stage set for A Midsummer Night’s Dream. The many exhibitions with Elspeth King as Director and Maria Devanney as the Fine Art Curator. My volunteers who kept me young, my interns from Germany, Belgium, England, and Scotland who were an inspiration. Also the other curators and academics in Scotland, the UK and abroad that I have worked with and the conservation staff who help me and the Museum save so many valuable pieces for Stirling and Scotland, and finally for allowing me to meet my partner Lesley who was a volunteer in 1990.

With my departure there will be a completely new staff for the first time in 40 years and I hope you give Caroline, Nicola, Pauline, Heather, Alan, Enija, Nikki, Brooke, Marai, and Morag the support you gave me so that they can create a world class museum for Stirling.

I will miss you all – people, animals, and especially the collections.

Your ticket for the: Oswald and Me