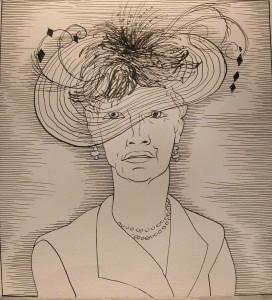 The great Scottish artist and writer Alasdair Gray has a dramatization of his ground – breaking novel Lanark at the Glasgow Citizens’ Theatre this month. After an accident in June, the artist is still critically ill in hospital, and as we wish him a good recovery, we feature one of his lesser known works from the Smith collections.

Alasdair Gray has always been a good friend to Stirling. His 70th birthday exhibition was shown in the Smith in 2004, and featured the preliminary work for the decoration of Oran Mor, the church which is now an arts and music centre at the top of Byres Road. The Smith exhibition was more modest than the Kelvingrove extravaganza held for his 80th birthday last year, but perhaps the Smith showed the way.

The rapidograph portrait was done during the Smith’s Leonardo exhibition in 2008, and is of Stirling fashionista, milliner, teacher, needlewoman and Smith volunteer Mary Rennie. It is not a likeness in the traditional sense, and it is not a portrait which pleased the sitter. Portraits are much more than likenesses, and this is a very skilled pen portrait, the product of a lifetimes’ practise. It is one of 30 works by Gray in the Smith. The earliest is from 1964.

Your ticket for the: Portrait by Alasdair Gray