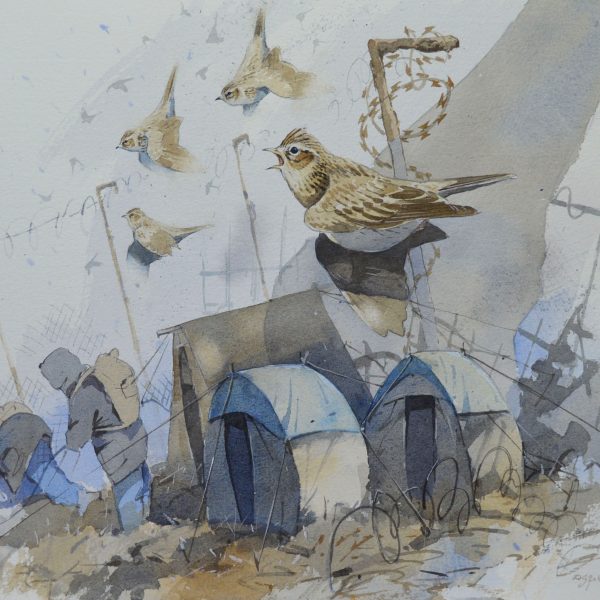 Join artist Derek Robertson as he discusses his latest exhibition at The Smith, Singing Under the Same Sky.  This event will delve into the inspiration and stories surrounding his ‘Migrations’ project.

Singing Under the Same Sky brings together several paintings from this project which seeks to trace the common threads of two of the biggest issues facing the world right now: climate change and the refugee crisis.

There will be an opportunity at the end of the lecture to ask Derek questions about his work.

*Please note, this lecture will contain themes that some people may find upsetting such as war, climate change, and the refugee crisis.

Derek Robertson was born in St Andrews, Scotland in 1967 and works from his studio in Fife. He has been a full time, professional artist since graduating from Duncan of Jordanstone Art College, Dundee, in 1989 with a BA (hons) in Drawing and Painting. His narrative paintings, assemblages and installations have been exhibited widely to critical acclaim. Inspired by the wildlife and wild places that he explores, they also depict a fusion of personal experience and the portrayal of images from the natural world. His interests have led him to write books and articles (Highland Sketchbook, Harper Collins; A Studio Under The Sky and Living Landscapes; Woodlands Studios and “Artist Sketchbook” series plus numerous press and magazine articles including instructional pieces for “Artists and Illustrators” magazine) and write and present a number of programs for television (Grampian, BBC and STV including the series “Portrait of the Wild” and “Drawn From Wild Places”). He exhibits work in galleries around the world and his paintings, prints and publications are held in private collections in over 50 countries as well as numerous public collections including those of HRH the Duke of Edinburgh, The Tate Galleries artist book collection, Leigh Yawkey Woodson Art Museum USA, and the Scotland Office in London. Derek has won the Pat Holmes Memorial Prize, The Guthrie Orchar Prize, the RSW Small Painting Prize (2010), RSW Glasgow Art Club Foundation (2011), RSW John Gray Award (2012), short listed for the Royal Over Seas Biennial Award and medal winner at the Wildlife Art Society annual exhibition.Highly Commended and finalist in David Shephard Wildlife Artist of The Year, London (2014 and 2015). Winner, BBC Wildlife Artist of The Year Visions of Nature Award (2014) Finalist in the Golden Turtle Art Award, Moscow (2014 and 2015), Purchase Award Leigh Yawkey Woodson Art Museum USA (2015) and Combined Award National Watercolor Society USA (2015). His book was nominated for the McVities prize and his TV series for an award at the Cannes Film Festival.

This event is free, and non-ticketed, but donations are welcome.

Your ticket for the: Artist Lecture by Derek Robertson