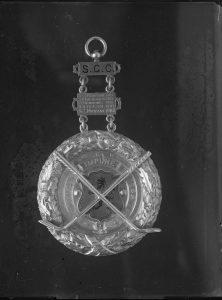 My opinion on golf might be that it is an unusual pursuit/hobby, however, I will admit to it being a very popular game with great skill and practice required to become proficient in it

Sport throughout history has been a very popular participant and spectator activity   The Olympics, Wimbledon and The Open being just a few events

Although, on a much smaller scale, Stirling Golf Club can be seen to have joined the bandwagon   I can just imagine how proud the winners and their respective families must have been when they won the medal in this photograph

It is always nice to be acknowledged, when you reach the pinnacle of any particular activity, and why should golf be any different   This medal might even have been won by players using clubs made by John Duncan.

Birdie, Eagle, Albatross, Bogey, Stymie and “Out” & “In” are all golfing terms which only those interested in the game will fully understand   I just hope that some of them don’t mean that poor birds flying overhead meet their end via a wee white ball.    Maybe it explains why you never see an albatross flying over Stirling Castle!

Just one final point   Has anyone ever actually seen the ball when Television Cameras are filming the great Golfing Competitions   All I have ever seen is the sky and clouds   “Spot the Ball” used to be a popular competition perhaps where golf is concerned it is a skill only a few possess!

Your ticket for the: Stirling Golf Club Medal