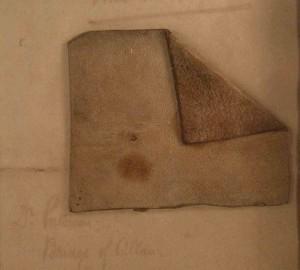 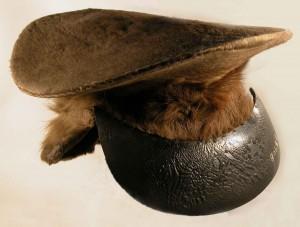 These include the deerskin and leather cap worn by the notorious body snatcher and murderer William Burke (1792 – 1829), who with his accomplice Hare committed at least 16 murders, to supply corpses for dissection to the University of Edinburgh School of Medicine. Body snatching from graveyards was halted by the use of mortsafes (great iron cages placed on top of the grave until the corpse had decomposed) and systems of watch and ward in the cemeteries. Burke and Hare were hanged in 1829, and the Anatomy Act of 1832 made dissection of corpses legal. There is also a piece of his skin, tanned and framed, along with its story.

The activities of Burke and Hare caused great revulsion. Burke’s mistress was Stirling woman Helen McDougal who was chased from Edinburgh, then Stirling, then Newcastle and was forced to go to Australia for her own safety, after the executions.

The skin was owned by Dr. Paterson of Bridge of Allan, who also had in his collection a bookcase owned by Dr. Robert Knox, the surgeon implicated in the murders. He knew of many other objects made from the skin of the two murderers.

Your ticket for the: Body snatcher William Burke’s Cap and Skin