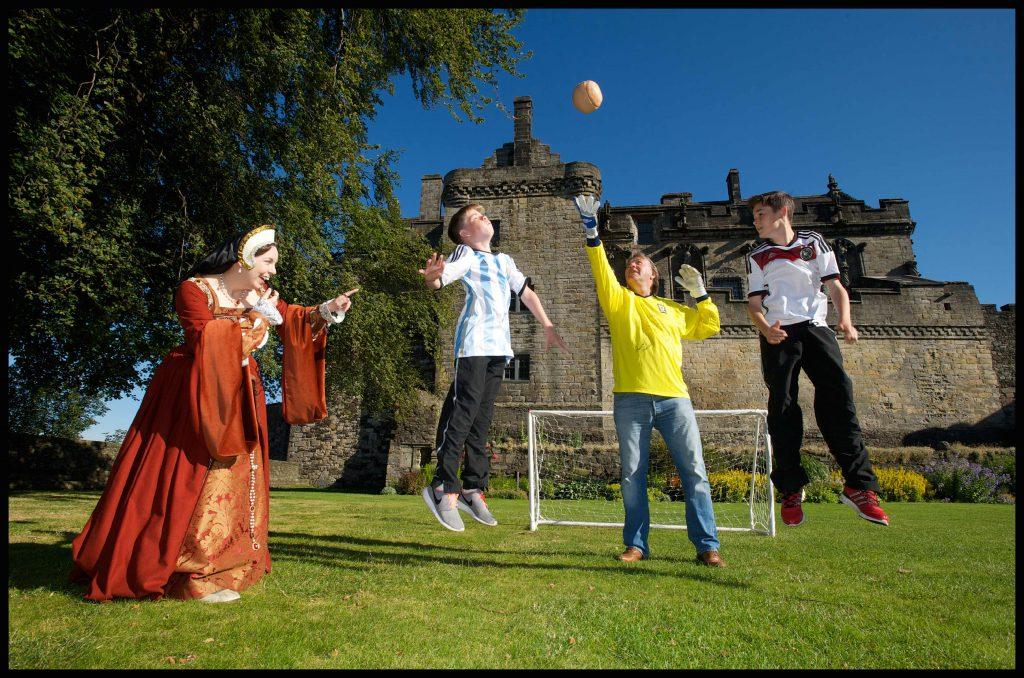 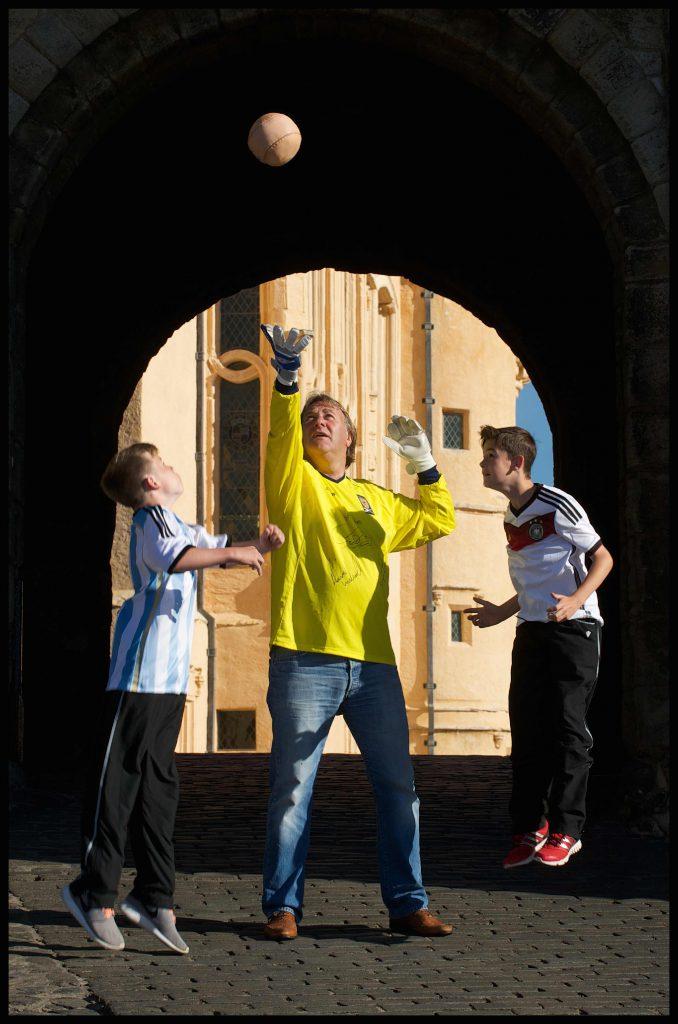 To celebrate Sunday’s epic clash between Argentina and Germany in the FIFA World Cup final, legendary Scotland goalkeeper Alan Rough has been getting to grips with an exact replica of the world’s oldest football.

The former Partick Thistle, Hibs and Celtic shot-stopper was at Stirling Castle, where the original 450-year-old football was discovered in the 1970s, to help VisitScotland, Historic Scotland and Destination Stirling to promote tourism in the city.

The original ball, which was found lodged in the rafters of the Queen’s Chamber and is thought to have belonged to a young Mary Queen of Scots, is on permanent display in the city’s Smith Art Gallery and Museum – which is also home to the world’s oldest curling stone.

Joining Alan for a kickabout in the Castle’s Queen Anne Garden were Stirling Albion under-13 players Niall Burns (12), representing Argentina, and Ben Cully (11), playing in the colours of Germany, as well as costumed performers Mairi Gibson (as Mary’s mother, Mary of Guise) and Bob Holsman (as James Guthrie).

Alan, who played for Scotland in the World Cups of 1978 and 1982 and is now a presenter for Central FM and STV Glasgow, said: “I’m sure not many people know that you can see the world’s oldest football in Stirling – it’s a bit before my time! And the castle is unbelievable – I think we should all make the most of what we have in Scotland and take the opportunity to visit places like this.”

Liz Buchanan, Regional Director at VisitScotland, said: “During what has been one of the most exciting World Cups in history, we are delighted that a Scottish football legend is helping us to promote the beautiful city of Stirling. We are now on full countdown mode for the biggest sporting event ever held in Scotland. The Glasgow Commonwealth Games begin on 23 July – exactly ten days after the World Cup final and, with The Ryder Cup taking place at Gleneagles in September, sports fans won’t have long to wait before the action kicks off again.”

Liz Grant, Commercial Business Manager for Historic Scotland, which runs Stirling Castle, said: “We were delighted to welcome Alan to Stirling Castle to enjoy a kickabout with a replica of the oldest known football in the world which was found in the rafters of the royal palace.

“The castle has many sporting links – including one of the earliest references to golf being played in Scotland – so it’s a great place to celebrate Scotland’s summer of sport.”

Dr Elspeth King, Director of the Stirling Smith Art Gallery and Museum, said: “The world’s oldest football is just one of many fascinating objects to be found at the museum, which takes visitors on an unforgettable journey through Stirling’s history, from prehistoric times to the present day and bringing together everything from the Battle of Bannockburn to Burke and Hare.”

The replica of the football is one of two specially commissioned by FIFA (the Federation of International Football Associations). The other will be displayed at the Football Museum in Zurich, Switzerland, which is due to open next summer.

For more information on the Smith Art Gallery and Museum, go to www.smithartgalleryandmuseum.co.uk

Your ticket for the: World’s Oldest Football Kicks Off Scotland’s Summer of Sport