A new treasure, added to the current Treasures of the Smith exhibition, is a 1/16th scale model of the famous plane built by Frank and Harold Barnwell, whose family home was Elco House, Balfron. Both brothers were educated at Fettes Academy, Edinburgh and their father was managing director of Fairfields Shipyard, Govan. 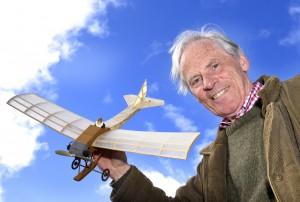 The Barnwell Brothers set up Grampian Engineering and Motor Company, Causewayhead, Stirling, in 1907 and designed and built the aircraft now known as the Barnwell Monoplane which was fitted with a Grampian 40 hp twin-cylinder engine. They piloted this monoplane in 1911 over the Carse of Stirling at a height of fifty feet and for a third of a mile, winning the Law Prize of £50 donated by the Scottish Aeronautical Society for the first flight in Scotland of more than half a mile for an all-Scottish aeroplane.

The scale model has been researched and built by Dr Peter Griffiths, a lifelong aeromodeller who has, over the years, constructed flying models varying in size from tiny indoor aircraft to gliders over 3.5 metres in wingspan. In his professional career he was a clinical and academic psychologist specializing in childhood neurological disorders and running clinics at Yorkhill and Ninewells Hospitals and Stirling Royal Infirmary

Your ticket for the: Dr. Griffiths’s Gift to Stirling – Barnwell Model