A new full colour book on the story of Hamish McKye Denovan (1993 – 2014) is published this week by Tatterdemalion Blue, a publisher now based in Stirling. It is the work of Stirling – based authors Angela and Craig Mair and is a tribute to the now legendary beast who began his working life at the Stirling Smith Art Gallery and Museum in 1996, together with the bullock Hector, seven sheep and three goats.

The occasion was the centenary exhibition for the artist Joseph Denovan Adam (1841 – 1996) who founded Scotland’s only school of animal art at Craigmill House, near Cambuskenneth. Adam made his students paint from life, and kept a fold of Highland cattle and other animals for that purpose. Students came from all over Europe to spend time at Adam’s Atelier. The Smith provided the same facility by way of tribute to Adam, whose works are now in galleries world – wide.

The presence of Highland cattle was a traffic–stopper in Dumbarton Road, but Hamish became world famous when the BSE crisis that year demanded the slaughter of all cattle over the age of three. It became a strange year of empty fields and burning pyres of cattle. Angela Mair was part of the ‘Save Hamish’ campaign, and Hamish served out his time at the Trossachs Woolen Mill, Kilmahog as possibly the world’s most photographed Highland beast. Copies of the new book are on sale at the Smith. 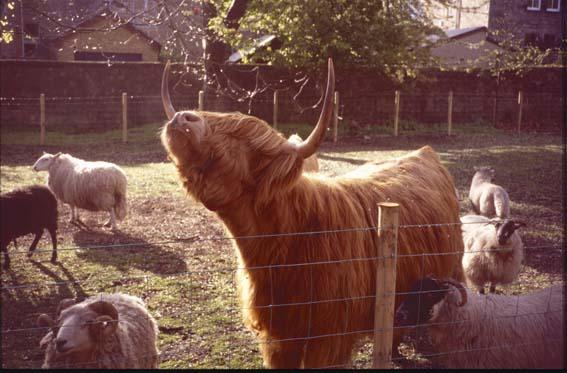 Your ticket for the: Hamish, the Publicity Coo