On the Centenary anniversary of the Battle of the Somme.  The Stirling Smith becomes the latest venue to host the artwork ‘Service’.  Gifted by artist David Roland to commemorate the contribution made by Scots during periods of military action and to celebrate the strong links between the Scottish Government and the Army in Scotland. 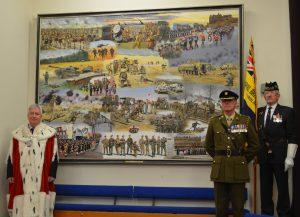 The artwork, Service will be on show in the Smith for 4 weeks, here it is welcomed by Stirling Provost Robbins, Maurice Walsh RLC, Harry McEwan RBLS Standard Flag Bearer

Service is made up of 22 scenes depicting military action beginning in World War One (the Battle of Loos 25 September – 18 October 1915), the role of the Auxiliary Territorial Service (ATS) during the Second World War, The Battle of the Somme, The Cold War, The Gulf War,  and  in Northern Ireland.

Ceremonial and duties and are equally recognised including the remembrance of those soldiers who fell during times of conflict.

These scenes are just an example of the important work the Army of Scotland has, and still, undertakes.

Your ticket for the: Service by artist David Rowlands